These are posted to Runa’s LinkedIn account at the end of every week. Follow us on LinkedIn here to get our weekly TL;DRs on your newsfeed.

Crypto Performance: Runa’s sector indices, which are built using liquid tokens and are market-cap weighted, were all down between 10% and 23% for the month, with the Utilities sector posting the worst performance. Here are our notes on some of the top out and underperforming tokens for the month: 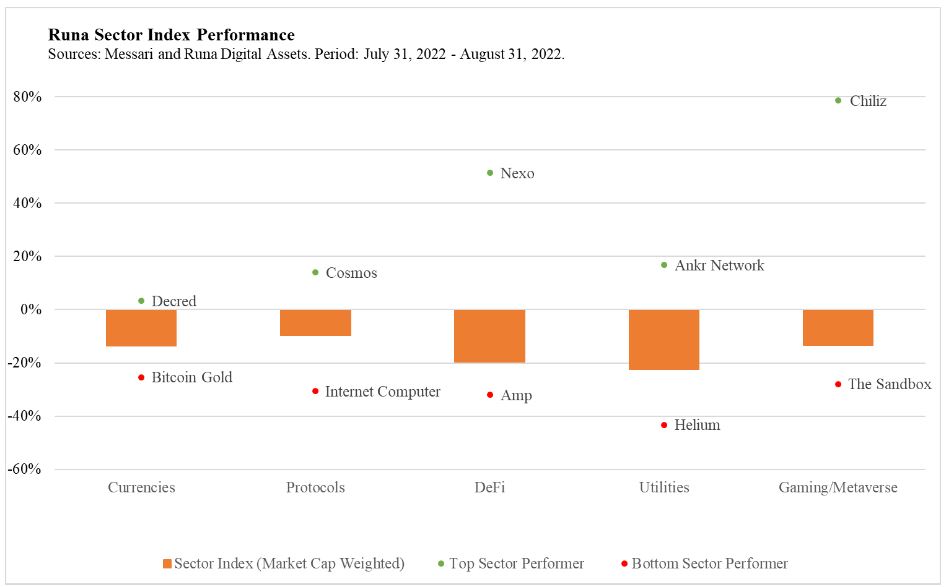 About the Author: Alex Botte

Alex Botte, CFA, CAIA is the Head of Client and Portfolio Solutions at Runa Digital Assets, an investment firm specializing in digital asset portfolios. In this role, Alex is responsible for the investment risk framework, chairs the Risk Committee, and contributes to content, portfolio analytics, research, and client engagement. Alex was previously a Vice President at Two Sigma, where she produced investment management-related content and helped with the development of the firm's factor-based risk analytics platform, Venn. Prior to Two Sigma, she was at AQR Capital Management, where she most recently served as a Product Specialist for the firm’s Global Asset Allocation strategies. Prior to AQR, she worked in Prime Services at Barclays. Alex holds a Bachelor’s of Science in Applied Economics and Management from Cornell University.